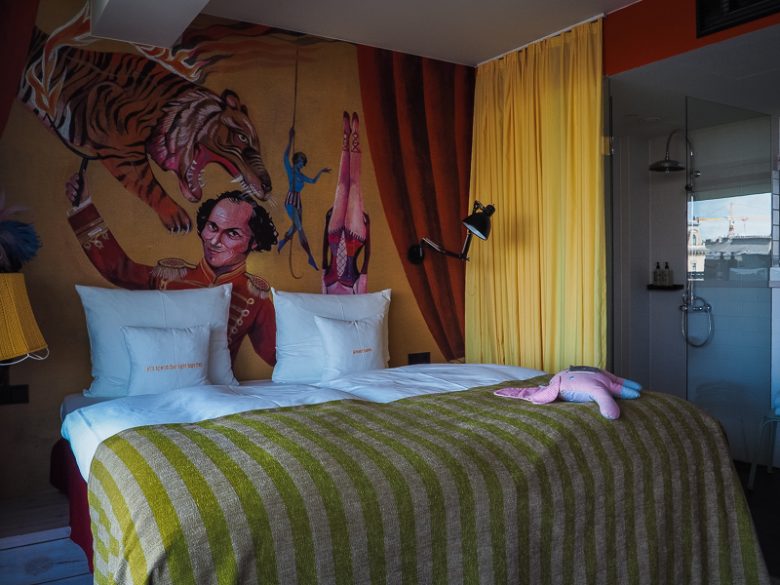 Inside Look: 25hours Hotel at MuseumsQuartier

Vienna; a city of extraordinary history, art, music, and hotels? Absolutely! Near the heart of the city, the 25hours Hotel at MuseumsQuartier delivers first class accommodations, memorable decor and a quirky circus theme that’ll make you feel apart of something greater!

25hours Hotels has properties all around the world, but this was our first stay with the company. It couldn’t have been a more pleasant experience, and the story behind the circus theme of 25hours Hotel at MuseumsQuartier is quite the tale.

In 1904, one of Austria’s most important circuses, Circus Medrano aus Wien began operation. Made famous in large part by the Medrano Sisters, this traveling circus would traditionally open on Easter in Vienna, and then make stops throughout Europe. The Circus Medrano aus Wien had a historical run, with occasional pauses due to damage from the war. Their final performance was in August 1969, nearly 70 years after their debut.

From your first steps through the door, the building positions itself as a haven for the artistically inclined. The entrance includes dozens of old cameras and periodically lit bulbs, a tongue in cheek way to make you feel like you’re entering the hotel of the rich and famous.

The lobby almost makes you still feel outside, with arbors and vines running up them, poles covered in posters, and an old style photo booth. There’s even a vintage pinball machine for gaming enthusiasts.

Hop over to Berlin and check out our 7 must see destinations!

Next to the lobby is the newly opened restaurant Ribelli, host to both a breakfast buffet and public restaurant for lunch and dinner. Their specialty is Italian food, and while the bolognese is wonderful, you can’t beat their flatbread pizza paired with a good ole’ Vienna beer.

The restaurant isn’t the only amenity in the hotel. Along with an elevator to easily access to upper floors, there’s a lively rooftop bar with a killer view, especially at night. Additionally for guests, there’s a fitness center, WiFi and spa.

Touring around the rooms, you’ll find the hotel prominently emphasizes its circus theme. You see this in the color scheme of the building, but also especially in the extravagant murals on the walls. It gives your stay something memorable to look at and remember the fun times of the Vienna circus.

Walk out onto the balcony, and you’re greeted with the finest view in Vienna, overlooking beautiful MuseumsQuartier. You can even enjoy the view while taking a bath, as there’s a bathtub on the deck!

Our room had an open design, with a single area containing the shower, bed, sink, writing desk and sitting area. It allows for ease of access, and simplicity in room design, but privacy is not forgotten since the toilet is in a small separate room.

With a prime location just minutes away from museums, public transportation, theaters, and even a zoo, 25hours Hotel at MuseumsQuartier is the perfect spot if you want a little adventure in your life.

**Although we didn’t stay at the 25hours Hotel in Berlin, we did make a chance to stop by their Monkey Bar, which is located on the rooftop of the 25hours Bikini Hotel. It offers fantastic food, drinks and a view of the city and zoo, in a lively atmosphere.